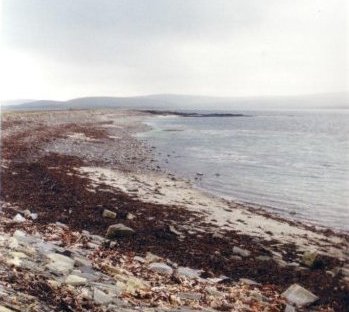 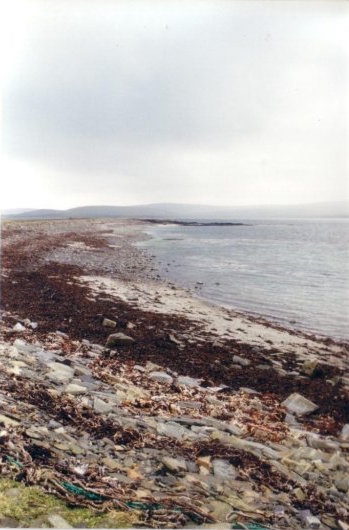 Over at Chuck Wendig’s super-active blog, he made a great (timely) post about how this constant checking of mobile phones that so many of us do is causing us to check out of our lives.

I wrote in a comment that, perhaps, got a bit off track, or what have you.

But it felt wonderful to write, and it brought back memories of that wonderful adventure — the whole amazing trip from start to finish, plus the person I felt to be before, during, and after, in a kind of “oh, yeah, that was amazing, wasn’t it?” rush to which a person is susceptible shortly before her birthday. Especially one of the Big Number ones.

It felt wonderful, and so I wanted to post it here. Especially since I can include a picture I took then. (Not that exact day, on that exact island, but near enough in atmosphere.)

Years ago — okay, it was The Year 2000. I had been in London for maybe six months as a resident film student and, because housing had a rather vagabond quality and my days and nights were to be taken up with on-the-go exciting Filmmaking Adventures, I’d decided mobile was a wiser choice than landline. In my hometown, no one except for maybe — no, I take that back — no one had cell phones. Those huge things with their extendable antennae caused cancer! And cost a mint.

My London mobile was slightly less long than my hand and had only enough screen to show what numbers were coming in or going out. I suppose it texted, but I did not. I didn’t use it as a calculator, either, (assuming that I could have). When I spoke with my parents on Christmas, it heated to the point that I frequently had to switch hands, and it gave me a massive temporal lobe ache.

It was an amazing thing. Durable even past the point of exploding open after hitting the ground. Several times.

I couldn’t dial my parents, of course — they had to dial me and pay the international extortion rates. But I had the confidence that should they need to reach me, should they wonder how I was doing, they could get me in an instant.

And then I took a solo trip to the Orkney Islands. It was the tail end of winter — which, that far north, is quite a tail. It was a good month before tourist season.

On the main island, cell reception was spotty, but it was there. That was nice, since the calls from my parents amounted to the most my voice got used. No one else was staying in the hostel. Most times, I was the only person walking around town. With my phone, though, I knew I wasn’t truly isolated.

And then I took a ferry to one of the outer islands. The voyage was an hour or so, maybe more. When you’re riding dark grey waters beneath misty grey sky, time becomes…less a part of your life. And when you do this by yourself, you become…more your self.

The island was nothing. A shack for the ferry terminal, a turnip farm (belonging to the guy who works the terminal), and several miles of barren land beyond that were closed up houses and a historic site I was unable to locate. The ferry guy drove me there. I thought I’d get a taxi back.

Taxi service existed only in tourist season. I was stranded in a winterized ghost town. If I missed the ferry back, I’d be stranded overnight.

On a tiny island at the tip of a bunch of tiny islands off the northernmost tip of Scotland.

No cell service. I couldn’t call people — not the hostel where my things were, not my friends, my family. And people couldn’t call me. And this was not on my itinerary. I’d told no one of this specific day-trip. It was foolish, yes, perhaps. But there it was. No one that I knew, knew exactly where I was with the whole planet potentially an option. I could’ve been anywhere.

And I was there, anywhere, by myself. Grey skies, grey sea stretching beyond the horizon.

Me and the land and the sea and the amazing wonder of it all. It was life, reduced to simplicity and revealed to be infinitely complex.

This site uses Akismet to reduce spam. Learn how your comment data is processed.